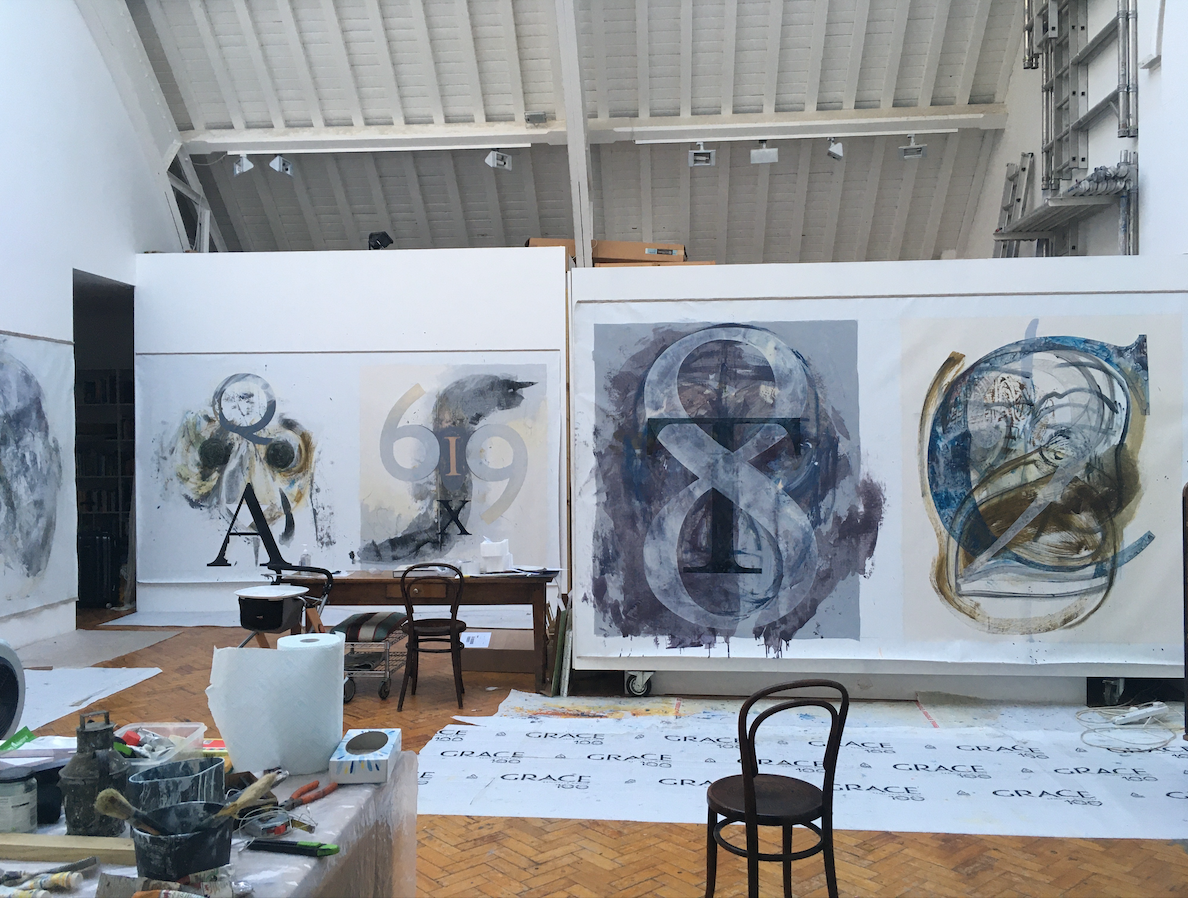 Born in Aberdare, Wales in 1943, Beard studied at the University of London and the Royal College of Art. Beard  has had a distinguished teaching career throughout England and Australia co – producing and appearing in a series of programmes for BBC 2 television in the UK. In 1989. he resigned from teaching in order to devote his full attention to his practice, Beard traveled extensively, living and exhibiting in New York, Madrid, Lisbon and London before establishing a Sydney base in 1997.

In 1998 he was Artist -in-Residence and his work was the subject of a solo exhibition titled After Adraga at the Tate St Ives in the UK. In 2000-1, His work Wanganui Heads was selected to represent the year ‘1998’ in The London National Portrait Gallery’s Painting the Century, a Hundred years of Portrait Masterpieces. In 2002, Beard exhibited in HEAD ON: Art with the Brain in Mind, at The Science Museum, London, England. He held a solo exhibition titled After Adraga II at the The Gulbenkian’s Centro de Arte Moderna in Lisbon, Portugal, and at The Art Gallery of New South Wales in Sydney, Australia. In 2010 a large body of work titled Gesichtlos- die Ästhetik des Diffusen/ Faceless- the aesthetics of Diffusion, was exhibited at Kunsthalle Darmstadt in Germany.  In 2013 he exhibited at The Royal Academy of Art’s exhibition titled ‘Australia’ . This was before a major monograph of his work was published and launched in London at The Royal Academy of Art in 2011 by Charles Saumarez Smith and in Sydney, at The AGNSW by Edmund Capon. In 2010 he became a Trustee of the Art Gallery of New South Wales. In 2016 he returned to the UK and established a home and studio in London. The artist now divides his time between London and Sydney.

A new body of work ’22 Vesalius’ will be the subject of Beard’s first exhibition with Messums. The paintings began after his return to London and the idea to create a new series of ‘self-portraits’. These portraits are unlike any he has made before: vast numbers and letters are overlayed, their sweeping forms suggesting the outline of a face, curve of a nose or hollow of an eye. The familiar forms of symbols and digits are rendered as abstract expressionist gestures and the monumental paintings are testament to the power of painting. His exceptional skill and unwavering originality are on full display, a typically momentous introduction for his first exhibition with Messums. 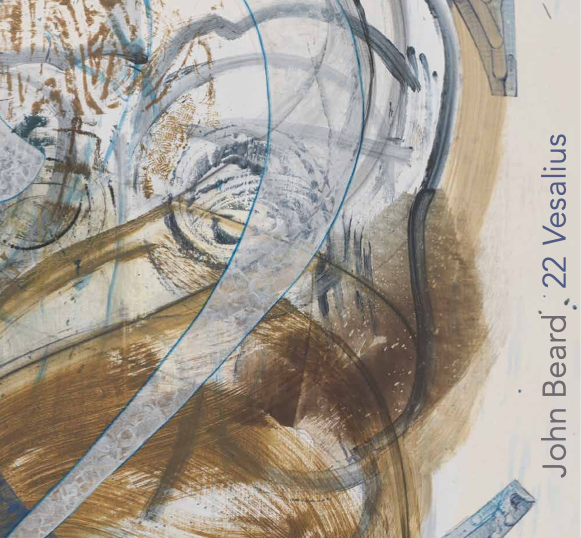 Return to a Familiar Obsession

My decision to make a new set of self-portraits posed a new set of problems. If they were to be new, then they should be fresh and original; at least in their appearance to myself. Ideally, something that I had not seen before.

I have made several series of self-portraits over the last four decades. I titled all of them variations of HEAD/ SP 6/97 (meaning Head/self-portrait number 6/1997). Each series was different from its predecessor; different in the sense that I attempted a new way of going about them. There is considerable variation in the series, ranging from the figurative to the abstracted, with some occupying that liminal space in- between representation and abstraction.

My idea with this series was to start anew by eliminating all the usual means by which one would attempt a self-portrait. Referencing oneself by means of a mirror, using photographs, videos, and of course existing drawings and paintings.

Through my construction of a self-imposed void, I was confronted with a naked beginning. I demolished all previously known parameters and constraints from which my self-portraiture had hitherto developed. In so doing, I provided for my practice a boundless revitalised framework.

The self-portrait is perhaps used here as a vehicle for a convenient continuum within my practice. Depictions of other human and animal heads, sea and landscapes, reflections on iconic historical paintings and artefacts, collaborative works with my children, multimedia installations about time, mapping, description and prescription. All these, one could argue, are vehicles for a continuing search toward the unfamiliar.

Working on all sixteen canvases simultaneously established a continuum between each painting. Mistakes and failures occurring in one work were exchanged for successful solutions in another. There existed, of course, an inherent danger of comparing, combining and of homogenisation. I wanted each painting to have its own identity and personality – its own life force. I think in the end, there were closely related sets or ‘families’ of three, four or five within the total group, and perhaps one or two that are oddly different.

The point of these paintings is painting itself, not just the ostensible object. The series proposes definitions of reality as provisional, in the acknowledgement that we are all involved in creating individual and collective notions of the ‘real’.

And so this series is derived of a dumb intelligence; a tacit knowledge.

What resulted was an orchestration of marks fused and layered, the facture of the surface creating a palimpsest; a visible evidence of the chronology and history of the work itself.

The freedom of the mark, the speed of the gesture.

Wandering and moving away from one’s own shadow – the escape.

An emanation of self and other, between the imagined and the real, feigned and untrue, sincere and vulnerable.

An evocation rather than a representation, a tacit knowing. No answers, just questions. 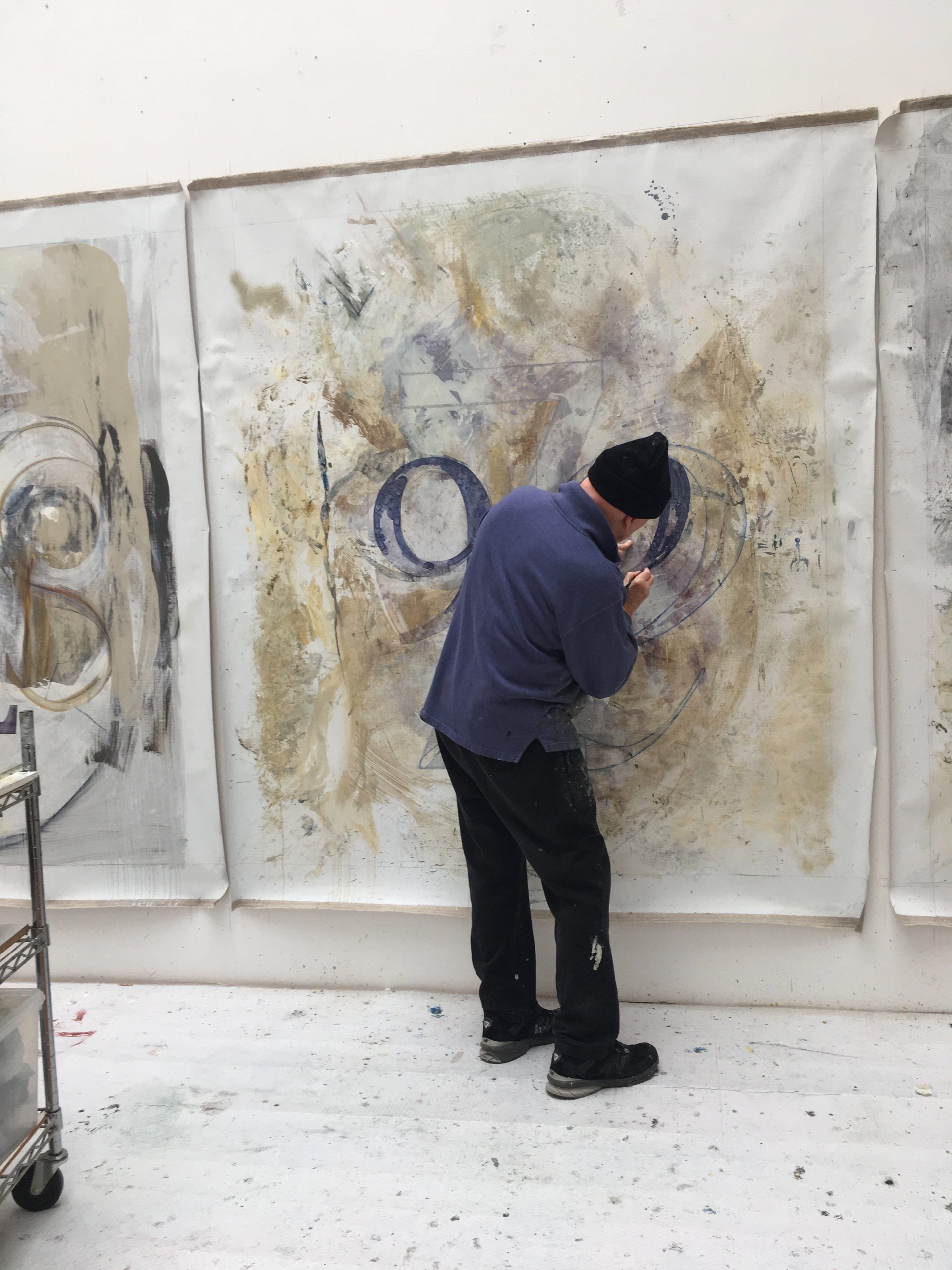 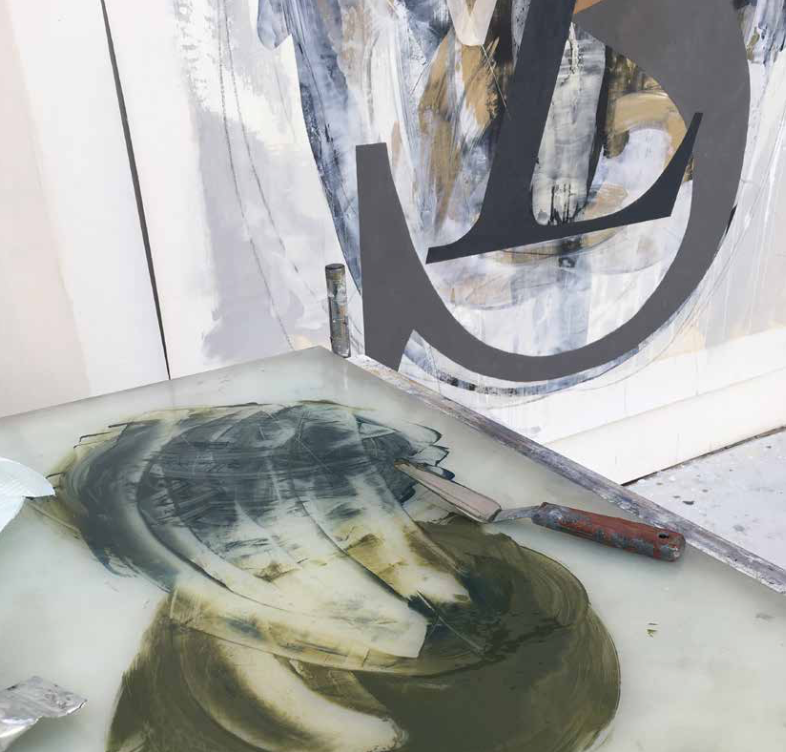 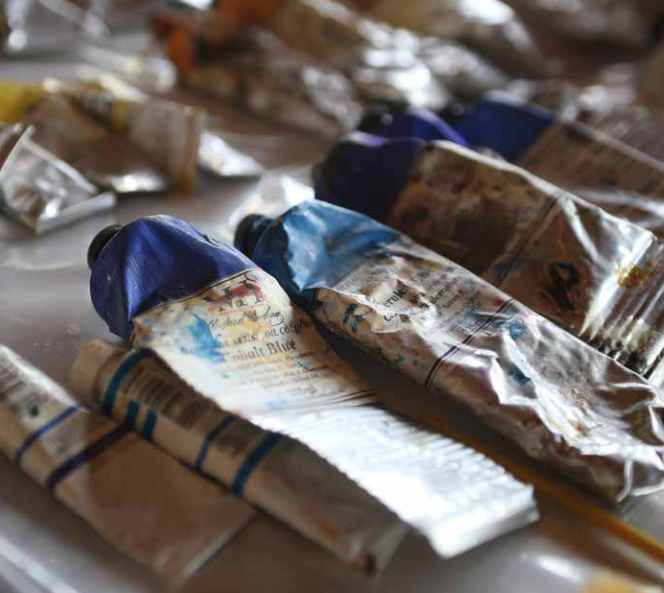 An exclamation in isolation

My days are delineated by both dramatic & incremental adjustments my husband makes on his new body of head paintings. Shapes, colours and now typography too, shift around the studio responding like an orchestra to his hog and sable brushes loaded with oil paint – Cobalt and Cerulean Blue, Raw Sienna, Cremanitz White and bleached off-white bees wax. Pigments wiped, re-applied and animated again.

Skulls left with open orifices: ‘Universal Heads’ – without racial reference – even as this pandemic discriminates. Ravaging blacks, browns and Asians too. Plastic sheets laden with colour squeezed directly from lead tubes, or scraped from a pigment covered glass topped trolley are scumbled over many passages of colour and shapes. Challenging for me to decode from one, two, three, four or more days before. An exclamation in isolation! 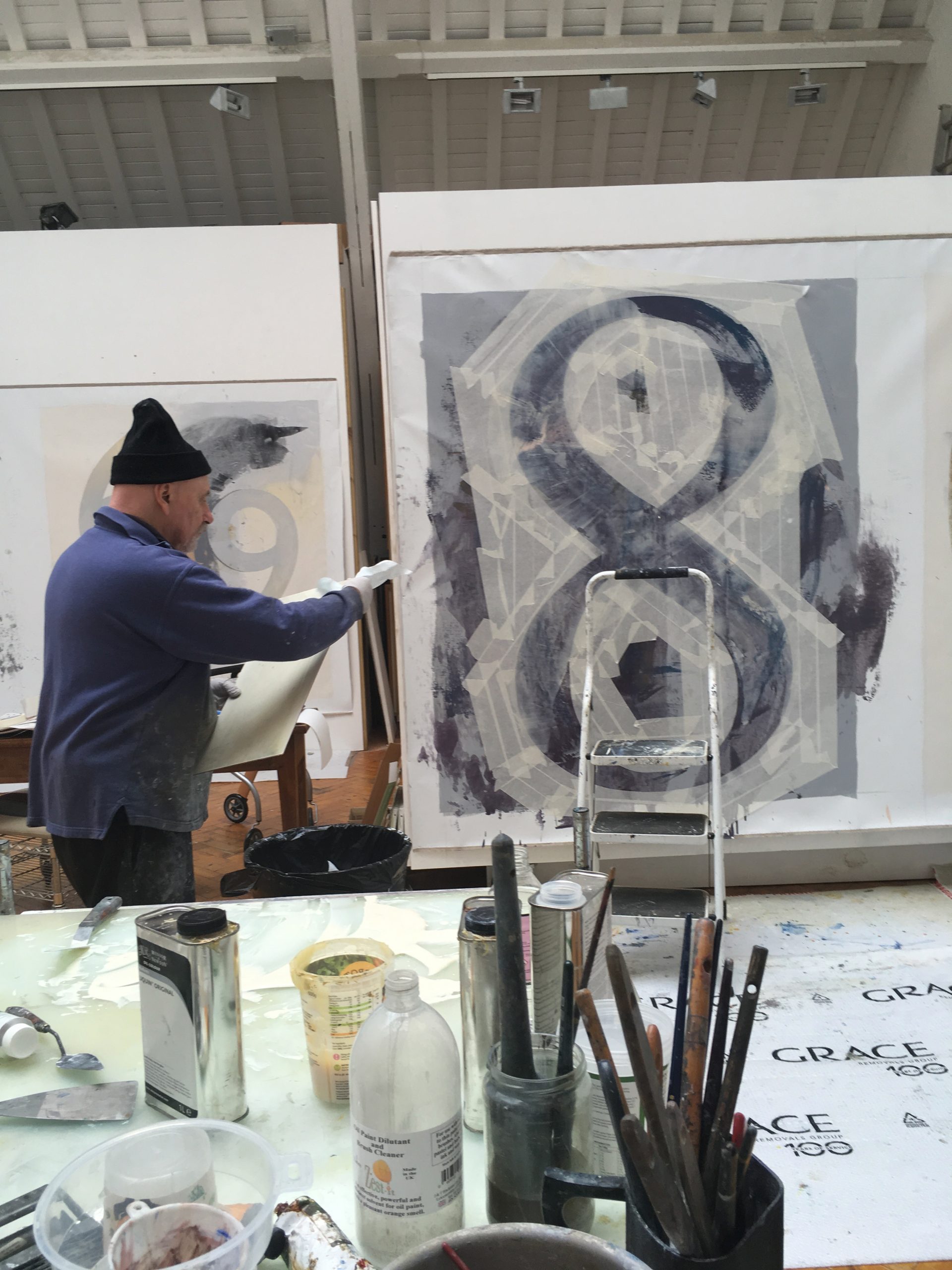 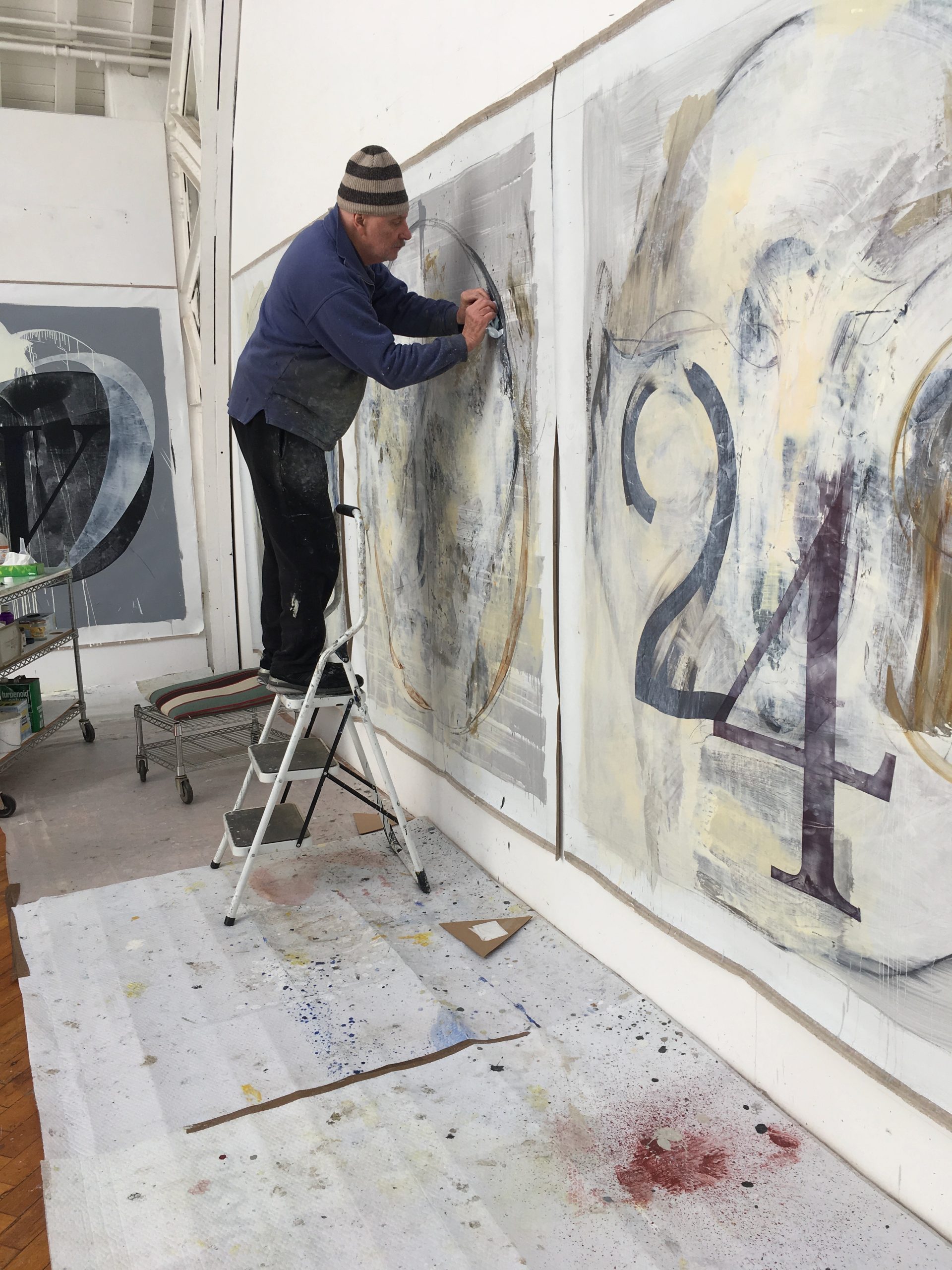